Now we’re getting serious! If you aren’t willing to take 10 minutes out to watch this video, then you’re probably not ready to earn this kind of money.

Most people are amazed when they hear about some of the incomes that are achievable with Avon. By any stretch of the imagination, £60,000 a year is quite something. Now an income such as this isn’t going to happen overnight, but some have managed to build up to this over the course of a year.

takes laser-focused dedication. Keeping the faith when things seem slow and sticking to your goals. This is such a lovely level to be at, as it brings in a better than average UK income and it is much like a ‘royalty income’ such as a writer or a pop/rock star might earn. This is a level that could be a longer term goal for you. Perhaps head off down Pathway 2 with an aim of focussing on pathway 3 in two or three years time. In this way, you can start your Avon business without it interfering with what you are currently doing.

What happens after THIS level?

Well, once you’ve reached Bronze Ambassador, you are earning a significant income and you are helping others to do the same. There are levels above Bronze Ambassador and we do indeed have Avon team builders earning a six-figure income. Would you believe that there are people earning £300,000, £400,000 and £500,000 EVERY YEAR! To give you an idea of time-frames, these sort of incomes have been attained by people 7-10 years+ in the Avon business.

I sometimes think that to begin with, getting your Avon business up and running is like pushing a snowball up a mountain. It gathers more snow and becomes bigger and bigger (and a bit heavier) and it can require quite a bit of effort pushing it up that mountain. BUT… there comes a point where that big heavy snowball goes over the top and starts rolling down the other side of the mountain, gathering speed and momentum and getting even bigger and EVEN BIGGER.

For those of you looking to really change your financial outlook but have existing commitments be they work and/or family. Think about what you want to earn with Avon, start on Pathway 2 and flip over to Pathway 3 once you are in a position to work Avon full-time.

If you are ready to give it a go, please fill in the application form here. 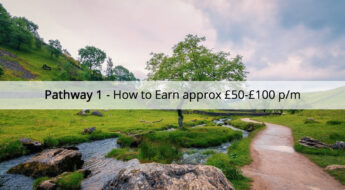